Skip to content
February 19, 2018September 23, 2018 GiftsOfNatureFarm
Well, the varmint was caught and the access has been severed. This little demon was trapped and released. Hubby couldn’t bring himself to kill it so he released it at the dump. The little booger took off like a “Nine Foot Indian.” (I wonder where that phrase came from other than my childhood.) He cleared a fence as if it weren’t even there. The next night another two chicks were lost with one of their heads stuck inside the coop door. Never did catch that one, but at least I now had an idea of what was going on with the raids. It seems that the ambidextrous coon can lift a wooden door that is even difficult for us at times. Now I could get a game plan together.

After a visit to the local Home Depot with two screen door latches in my pocket I secured the coop door from the inside (I really have to clean my tools and give them a good oiling as they were left in the rain by someone who will not be mentioned). This has seemed to work well as we have no longer experienced any losses. Now to begin work on a covered pen that will incorporate the door inside. Purchased some fence posts yesterday and as soon as I finish baking for the Farmer’s Market I’ll be able to start on the new yard. After that is completed I’ll have to sit in the orchard with the Ladies while they free roam. A chair, a book, a cup of coffee, and Nature all around… I couldn’t think of a better way to spend my time!

In the meantime, one of my Does surprised me with two new, beautiful Doelings. Sitting with them is such a breath of fresh air. They are the cutest and sweetest little girls ever. Now the herd numbers twelve. This season the Girls will be taking a break from breeding as I find a new Herd Sire for them. Should be interesting!
Spring is in the air down here in the South and what a welcomed time it is! The garden I started to put in was very nice, but with the demand at the Farmer’s

Market for produce and herbs, I have had to redesign AGAIN! Here is the updated version that is the template for those to follow. In addition, I will be planting two new strains of hull-less seed pumpkins. I can’t wait to see if these are successful. Plans are in the works for potatoes, sweet potatoes, garlic, green onions, thyme, oregano, parsley, and too many more to mention here.

I’ve also been able to set up a new compost bin and loaded it with fresh kitchen scraps as well as horse and goat manure. This should make some fine garden soil in a few months.

Let me know what you have planned for Spring!

I am in hunting mode (which has never happened in my lifetime) and looking for blood!

We’ve been hit again by the infamous predators, seven more birds down. I am beyond flabbergasted as the new birds are in the hen house and it is a HOUSE! The doors, windows, and ramp were closed tight. How, how did they do it?

I’m on a mission! Went out an bought a trail camera and rat traps today. Tonight we set out the three rat traps and a have a heart trap one on each side of the house. I thought I would never say this in my lifetime as I totally believe is live and let live. But if anything survives, it will be its last day tomorrow.

My greatest loss this past year was my Light Brahma Rooster that I raised from a chick. Everyday I went to see him I would tell him “good morning” and reach down and stroke his back. Eventually, he thought his name was Good Morning so it stuck! What a great boy he was and he died saving his Ladies.

All rat traps were sprung but no critters in the traps. However, a 15-20 pound raccoon was caught in the have-a-heart trap and will be released today at the local dump where it can eat to its heart’s content! Hubby doesn’t have the heart to kill it!

I’m sure hoping that those who signed up for the Ranch’s updates are still out there as it has been a very long time since the last newsletter.

This past December made two years at the new location and it has been a very eventful experience. Besides installing the new fencing, building a new garden shed, and designing and planting the new garden our entry into the local Farmer’s Markets has been an outstanding venture. In addition another five acres has been acquired for pasture land for the horses and goats and to obtain rights to the entire one acre pond.
This is a glimpse into the progress we have made since 2015.
Fencing: 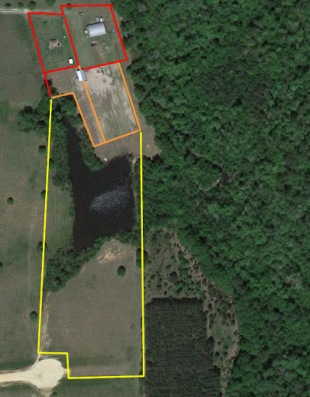 Directly after finishing this massive project, the new garden shed was placed in its new location. It will get a lot of equipment out of the shop and is centrally located between the orchard and garden. Now we just have to finish off the inside.

Originally it was going to be an additional chicken coop, but that is another story. We started 2017 with almost 30 chickens and a great crop of eggs.

Then the raids began. We can only guess at who is/are the culprit(s) as the ground is not good for tracks. One to two at a time the birds began to disappear. Sometimes there would be feathers and sometimes not, sometimes a body and sometimes not but always a loss. It can only be coon, possum, owl, hawk, or possibly bobcat as the dogs seem to keep the coyotes at bay. After each and every bird was lost we began again. This time we raised another 30 birds only to lose them again. Not a good year at all. We are at it again and have 20 beautiful birds growing out as I write this sad tale. This time however we are going to fence an area alongside the chicken coop and put a top on the fence. This will give them a safe place to grow up and give us some time to erect some new topped pens in the orchard. Guess their free range will be reduced a bit. 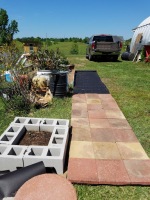 As is normal with me, it is design, build, redesign, move, build again and so on and so on…Redesign is in progress even if it is only in my head at the present time. The compost 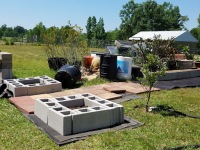 pile is growing slowly but will produce much needed fertile soil for the Spring. The original pile that came with the property has been 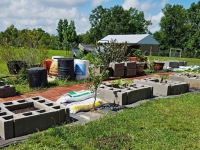 cooking for two years now and I will tear into that as soon as the wintry weather bows its icy head to say goodbye! 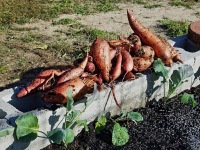 2017 was the first year we got serious about participating in the local Farmer’s Market. To our surprise, we were a bit successful! We won’t ever get rich doing this, but we love the atmosphere, fellow vendors, and customers. At least we are able to make 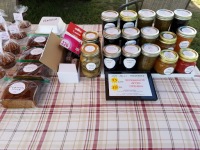 enough to pay for the feed bill and a few other items around here. Every little bit helps! We started out at the Bay St Louis Market, moved to the Poplarville Market, and will shortly begin a new Market at Stennis. During Winter the Bay is too cold and Poplarville closes down for the Winter. Stennis however is an

indoor market so I’m looking forward to that one in particular.

We’ve had great response to our eggs, breads, jams, preserves, pickles and herbs. Seems my baking and canning is a success! This year I even made Eldeberry Syrup, Nature’s Tamiflu, and Pear Vinegar with pears from the orchard. I’m getting there!
The critters are doing well with the exception of the chickens. Horses, donkey, and goats are fat and sassy. We had a great crop of babies at kidding time this past Spring and after sales now have ten does and two bucks (soon to be wethers).

Life is good at the Ranch!

February 12, 2015December 28, 2018 GiftsOfNatureFarm
As I was enjoying my first cup of coffee this morning my cell phone announced an early morning call. As I picked it up my foggy morning brain tried to make sense out of the fact my husband, Bill, was calling me from outside. So I answered the call with, “Hello, what’s up?”
He replied, “You better get out here, there’s two baby goats running around!”
Well, needless to say, I ran to put on my boots, unlocked the front door, and sped out to the front pasture. What a beautiful sight! Two healthy and, at times, bouncing baby Nigerian Dwarf babies. My sweet doe, Mocha, did a marvelous job without me. I have been hoping for doelings so I can add to my herd and she didn’t disappoint.
Here are a few pictures for you to enjoy. What do you think of these two sweet baby girls?
March 18, 2007December 28, 2018 GiftsOfNatureFarm

Tommy Girl came through like a champ… she had a beautiful foal officially named Tommy’s Treasure; we call him Mr. T!
;o) 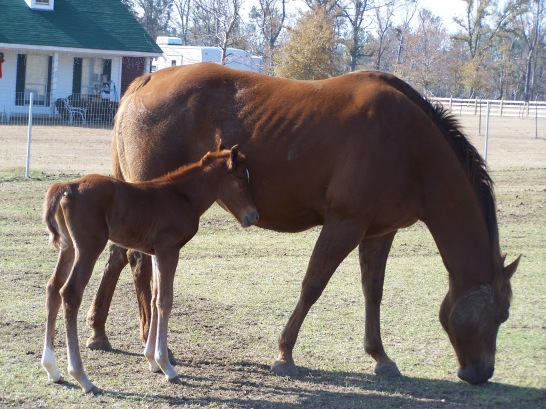 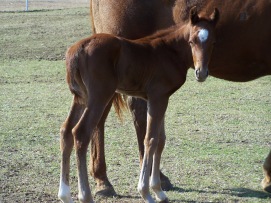 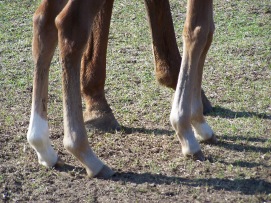 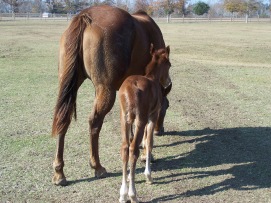 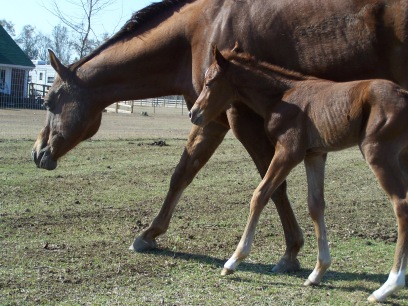 Click on an individual image to see a larger picture.